It is important to understand that this platform implements only a subset of the TripRequest options. The documentation below describes TripRequest and how it is implemented by SBB.

TripRequest is a route planner. A starting stop and a destination point are expected to provide the input. Departure and arrival times can also be specified.

The implementation used by SBB enables it only to search for direct journeys. For example:

An API keyword is required to access this API. It can be obtained via the Developer Portal. The token must also be sent in the HTTP header as “Authorization”.

In the case of the current TripRequest service, the developer can request a starting and destination stop (DiDok ID) and, optionally, the relevant real-time data for a time in the future (default = now). They will receive real-time information, if available.

This request is transferred as body.

Explanatory notes on the elements in the request

The following VDV 431 parameters are not implemented either:

Extracting and explaining a response

The response has the following basic structure:

The response includes the following elements

“MoreData” is always false, as all the data is supplied.

The “Service” structure is described here:

The response will contain an “ErrorMessage” if there were problems executing the request: 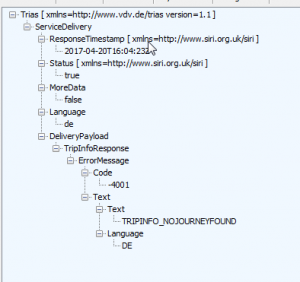 The following information is vital for external developers: