General Transit Feed Specification (GTFS) is a digital exchange format developed by Google for timetables used for public passenger transport services and relevant geographical information, such as locations of stops. Data is supplied by transport companies and published as an accumulated database in GTFS format on the Open Data Platform Swiss Public Transport. The data is used to develop applications relating to public transport, such as timetable queries.

Unlike GTFS Realtime (GTFS RT), GTFS Static, as the name suggests, only provides static data and no real-time data.

This static file is first used to present a country’s entire public transport operation in a single feed.

GTFS Static is provided in ZIP format using a series of text files. Each file provides information about a particular aspect of the transit information, for instance, stops (stops.txt), routes (routes.txt), journeys (trips.txt), transport companies (agency.txt) and other timetable-related data. Some information is required to provide valid GTFS data, while other information is optional and provides useful additional information (e.g. changes to the timetable on specific public holidays = calendar_dates.txt).

The diagram below illustrates how the different types of information interact, showing that, at present, not all information has been recorded for public transport in Switzerland and is available in GTFS Format. 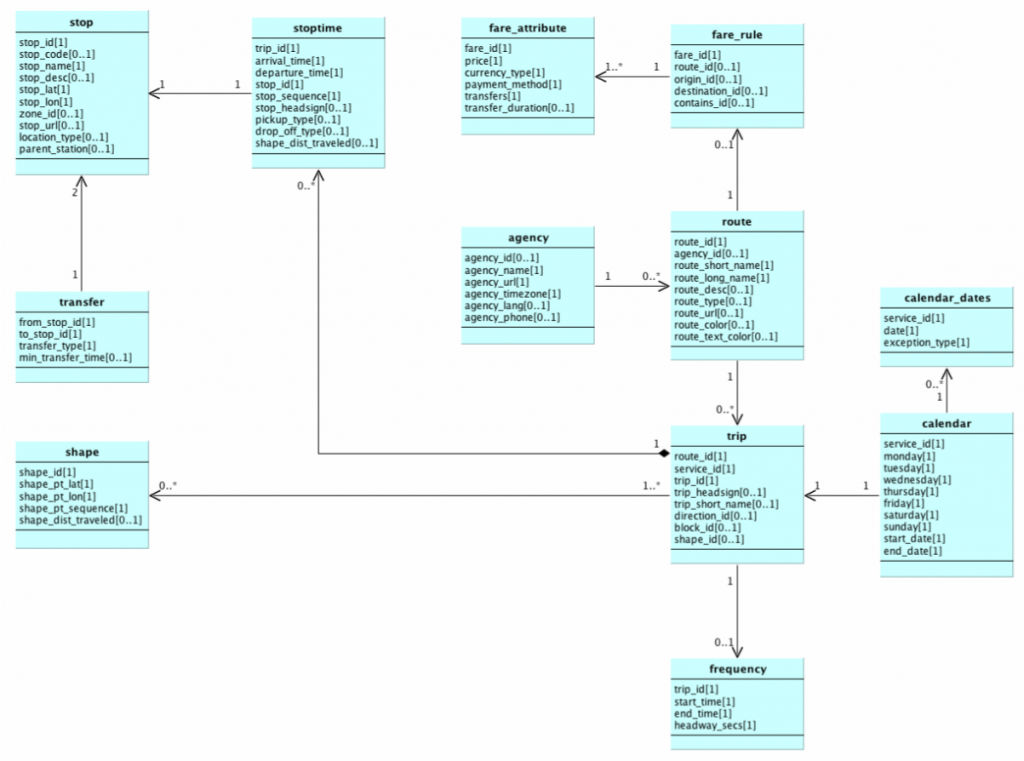 Each file comprises comma-separated rows of texts and numbers, which combine to provide the information being sought. A comprehensive description is provided of the individual fields in the various files on the following website: https://developers.google.com/transit/gtfs/reference/

The following files are currently provided for the GTFS export for public transport in Switzerland:

The means of transport texts which are used:

The platforms must be modelled in GTFS as individual stops. Replacing the platform is then the same as replacing the stop from a GTFS perspective. 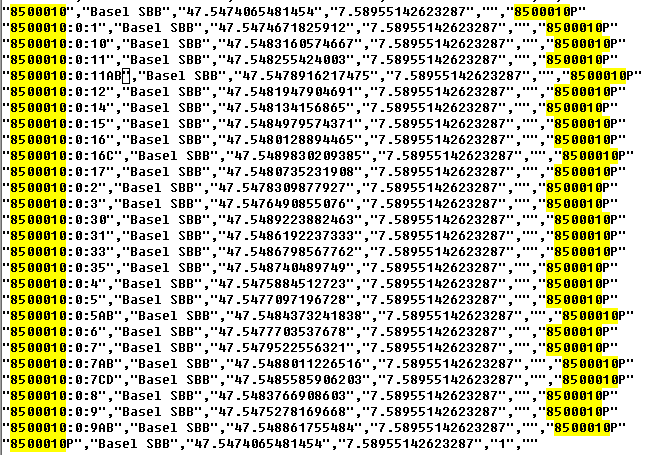 Consistency in terms of identifying between versions of the static file

The GTFS Static is recreated every week. This means that the “service_id” and the “trip_id” may not be identical.

When are there new GTFS Static files?

The new HRDF is published on Mondays.

The GTFS upload is carried out via script on Wednesdays at 09:10. The GTFS-RT feed downloads the files at 14:00 via script. It then takes about 5-10 minutes before the files in the system and, therefore, the GTFS-RT feed are switched.

We make every effort to produce correct GTFS Static files. Google suggests testing the internal consistency using the FeedValidator. Unfortunately, the current version is unable to cope with the size of our file. Another tool that can be used is gtfstidy, which includes among its functions the option to carry out validation using the parameter “-v”